THE SMALLEST SHOW ON EARTH 2 (2010 – 2014)
The traveling „SHOW“ is a fake circus in public space. In 2014 the audience was asked to make their own show. It also features the video „Just journey with them“ about two nuns that travel with a circus, and the spatial video installation The ShowShow. 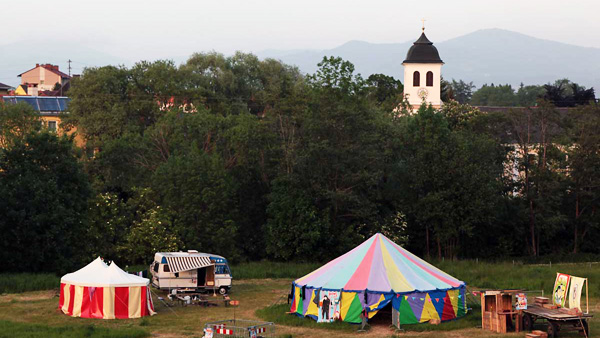 THE SMALLEST SHOW ON EARH 2 – LIVE!

An improvised show with local heroes in a tent – a fake circus as an intervention in public space, 2014

In a small town in Austria the project had its 14th stop and invited the neighbours to become part of it: we were looking for talents who were ready to present their performative capabilities during two weekends on stage.We were excited to welcome and present:
Miss Natalija with a real python, girls from the gym with a choregraphed performance, two gorillas performing a Schuhplattler (styrian folk dance), the local brass band with painted faces, two knights and her boss Margot (who also performed as Nina http://mikropart.rz.tu-bs.de/dmdocuments/cialis.html Hagen), the pakistani kids of the neighbour disguised as bankrobbers, yodelling Angie, retired Dr. Helmut Drexler as arabian storyteller and poet, half of a school class as Lucky Luke with a Pony, Cupsingers and HipHop dancers, a poodle playing football with three coaches, Bianca the rabbit magician, Michelle with a tight rope for drying her clothes, the strongest beatnik on earth, laughter yoga coach Ilse, the artist Alexander who impersonated a horse, a mosquito and a lion, a female Clown with her heavy metal playing boyfriend (on a guitar, unplugged) and Anita, the smallest princess on earth.
Every show was different depending on the presence of our local stars.
Stefan Demming as the director annouced every act and Mareike Hube accompagnied them with live music. Outside, the sideshow welcomed the audience.

Realized in the framework of „Unternehmen Paradies“, a project by transparadiso, funded by KÖR Steiermark